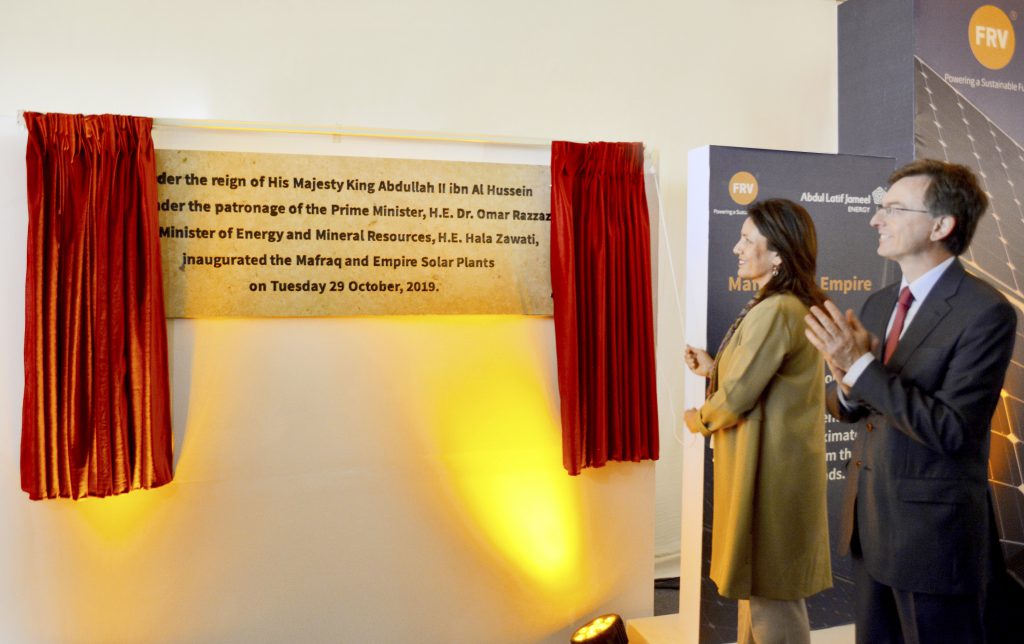 Fotowatio Renewable Ventures (FRV), part of Abdul Latif Jameel Energy and a leading global developer of utility-scale renewable projects, has inaugurated the Mafraq I and Empire photovoltaic solar plants of 50 MW AC each.

The inauguration ceremony took place under the patronage of H. E. Omar al-Razzaz, Prime Minister of Jordan and counted with the participation of H.E. Ms. Hala Zawati, Minister of Energy and Mineral Resources, H.E. Ms. Aránzazu Bañón Dávalos, Spain’s Ambassador to Jordan and H.E. Eng. Amjad Rawashdeh, General Manager of the National Energy Company (NEPCO) who represented his company together with its Chairman H.E. Eng. Sakhr Al-Ajlouni. In addition, distinguished guests, officials and representatives from the Saudi Embassy, Mafraq’s Governorate and some of the world’s leading financial institutions attended the event, next to Daniel Sagi Vela, Chief Executive Officer of FRV and Raad Al-Saady, Senior Managing Director, Business Development, at Abdul Latif Jameel.

The plants generate a total of 134 MW DC, which is enough to supply more than 40,500 households and avoid the emission of more than 200,000 tons of CO2 per year. This is equivalent to removing approximately 44,000 cars from the country’s roads.

The Mafraq I and Empire projects, awarded in the second round of the Jordanian government’s solar program, represent a total investment of US$ 180 million and created approximately 500 jobs during their construction phase alone.

In collaboration with Abdul Latif Jameel Energy, FRV has developed three solar projects in Jordan to-date, Mafraq I, Empire, and Al Safawi (66.7 MW DC), and is continuing to expand its pipeline in the country as part of its commitment to developing renewable energy capacity in the region.

Plans are already underway for FRV’s fourth 50 MW AC solar photovoltaic plant in Jordan, having won a competitive tender by the Water Authority of Jordan (WAJ). The project will be located in Al Dulail Industrial Park and is expected to create 300 jobs during the construction phase. Once completed, FRV will have developed approximately 270 MW DC in the country, covering a land area equivalent to 885 soccer fields.

Altogether, the four solar plants will supply more than 600 GWh per year in Jordan, powering more than 83,000 Jordanian homes with clean energy and representing approximately 3% of the country’s total electricity generation. As a result, more than 425,000 tonnes of CO2 emissions will be avoided each year, equivalent to removing approximately 90,000 cars from Jordan’s roads or 4.3 billion kilometers travelled.

In his speech, Tristán Higuero, FRV’s Chief Operations Officer for the region, thanked everyone involved in the successful outcome of the projects and emphasized the solidity of FRV’s activities in Jordan: “The opening of Mafraq I and Empire is undoubtedly a key milestone for the company. It not only represents the success of our projects in Jordan, but it is also evidence that the future of energy in the country is clean and renewable. Our commitment is clear and we will continue to support Jordan through long-term investments in its transition to a more sustainable energy model”.

Daniel Sagi-Vela, Chief Executive Officer of FRV also joined the round of speeches and added “The future is promising and that is why I would like to highlight the willingness and firm commitment of FRV and Abdul Latif Jameel Energy to continue investing in this region. We are determined to play a relevant role and we have the experience, track record and knowledge to lead this process”.

Raad Al-Saady, Senior Managing Director, Business Development, Abdul Latif Jameel said: “With power demand in the MENAT region increasing by around 7% annually, there is a pressing need to develop sustainable alternatives to traditional energy production. Abdul Latif Jameel as a whole, and its energy focused company, FRV, are proud to be launching the Mafraq I and Empire solar plants today, joining hands with FRV and the Ministry of Energy and Mineral Resources in developing Jordan’s solar power industry.”

Social contribution to the Jordanian community

This opening celebrates FRV’s commitment to renewable energy development in Jordan and its support for the communities where the company operates. During the construction phases of its three solar plants in Jordan, FRV has generated more than 700 jobs.

Beyond FRV’s dedication to a realistic and sustainable, clean energy solution for the Jordanian people, the company’s commitment expands into the economic and social development of the wider community.

In December 2018, FRV was proud to sponsor the Crown Prince Foundation and collaborate with young engineering students, academics and consultants, to launch Jordan’s first nano-satellite on its mission to gather images of Jordanian tourism and cultural spaces in one of the country’s most innovating projects.

In addition, as part of its social contribution, FRV has developed initiatives such as the FRV ‘Young Talented Leaders’ scholarship. The scholarship covers the cost of undergraduate studies at IE University in Madrid, one of the most prestigious universities worldwide and where H.E. Ms. Hala Zawati, Minister of Energy and Mineral Resources, had the opportunity to study as well. This scholarship is aimed at students from a country in which FRV is developing a successful project; three Jordanian students have already received the scholarship and a fourth scholarship will be given regarding FRV’s latest project with the Water Authority of Jordan.

We believe that our success needs to have a positive impact in those regions where we operate and that education is the best channel to meet this goal, and to improving the future of those communities that embrace our projects